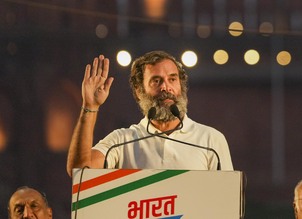 New Delhi, Dec 24 Congress leader Rahul Gandhi accused the BJP on Saturday of using communal hatred as a weapon and spreading it across the country to divert the attention of people from real issues.

Addressing a big rally outside the Red Fort as the Congress's "Bharat Jodo Yatra" entered the national capital, Gandhi said he has not seen violence or hatred anywhere in the country while walking hundreds of kilometres from Kanyakumari to Delhi, but he sees it being spread on television all the time at the behest of the powers controlling the media.

The former Congress chief also alleged that Prime Minister Narendra Modi and the ruling Bharatiya Janata Party (BJP) spent thousands of crores of rupees to destroy his image, but he has shown the truth to the country in just a month.