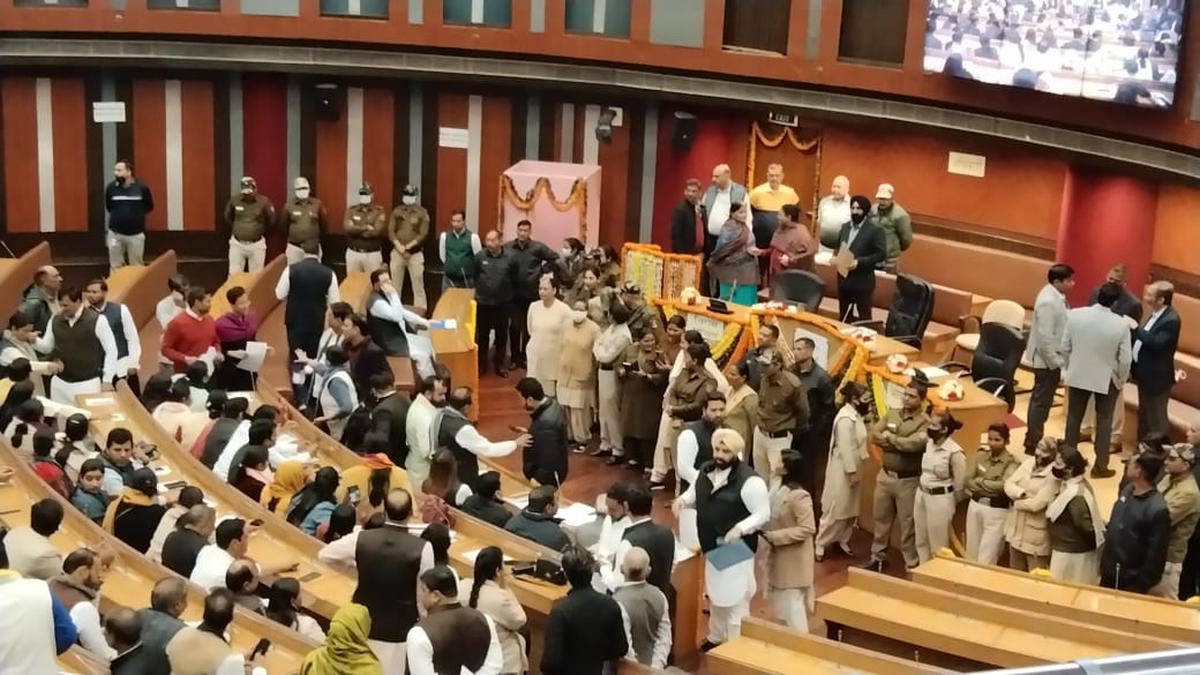 Presiding Officer Satya Sharma adjourned the MCD House meeting indefinitely, due to yet another ruckus between the AAP and the BJP Councillors. No elections was held for the Office of the Mayor today.

Mr. Sharma said, “A House cannot run like this...House is adjourned till next date.” There was heavy security deployment inside the Municipal House, the Civic Centre premises and even the Well to avoid a repeat of the chaos that ensued during the last meeting on January 6.

The new 250-member Municipal House of Delhi reconvened on January 24 to elect the Mayor and Deputy Mayor of the National Capital, weeks after the first session was adjourned following a ruckus between the AAP and the BJP.

Mr. Sharma took a call to first administer the oath to the 10 persons (aldermen) nominated to the Municipal Corporation of Delhi (MCD), amid cries of “shame shame” from AAP Councillors.

The aldermen then went on to complete the oath-taking process, after which the elected Councillors were administered the oath. This was followed by the annual election to the Office of the Mayor.
Shelly Oberoi and Ashu Thakur were the AAP’s contenders for the post of Mayor. The BJP had nominated Rekha Gupta. The nominees for the post of Deputy Mayor were Aaley Mohammad Iqbal and Jalaj Kumar for the AAP and Kamal Bagri for the BJP.

Both the AAP and the BJP expressed confidence in winning the mayoral elections, even as the dispute between the two — over the sequence in which the nominated members (or aldermen) and the elected Councillors will be administered the oath — threatened to derail the House proceedings again.

Authorities stepped up security inside the municipal House and on the Civic Centre premises for the mayoral poll.

A larger number of civil defence personnel, including women members, and marshals were deployed compared to the deployment during the first Municipal House on January 6, a senior official said.

Members of AAP had launched a protest in the MCD’s first House meeting on January 6 over the decision of the presiding officer — BJP Councillor Satya Sharma — to first administer the oath to the 10 aldermen nominated by the L-G, while accusing the BJP of trying to rig the mayoral elections through its attempt to provide voting rights to the aldermen. In response, the BJP had said that the House was run as per the Delhi Municipal Corporation Act and accused the AAP of disturbing the proceedings.

Delhi BJP spokesperson Harish Khurana said, “We are confident that if everything goes on smoothly, Delhi’s next Mayor will be from the BJP.” On the issue of who will take the oath first, he said, “I don’t understand why there is a problem over who takes the oath first. Everybody has to take the oath. The Presiding Officer will decide the order.”

Clarifying his party’s stand on the issue, AAP’s MCD in-charge Durgesh Pathak said that as per the civic body agenda for Tuesday’s meeting, Councillors are supposed to take the oath before the aldermen. “The people of Delhi have given a huge mandate to the AAP, which must be respected. We appeal to the BJP to cooperate in convening the House and the elections tomorrow based on this agenda list,” he said.

“Police and paramilitary personnel have been deployed outside the House as part of security measures,” the official said.

Several Councillors and Delhi MLAs, including AAP member Atishi, reached the House to cast their votes.

The Municipal Corporation of Delhi (MCD) House was adjourned on January 24, 2023 without electing mayor and deputy mayor amid a ruckus by some councillors.

After the oath of aldermen and elected councillors, the House was adjourned for 15 minutes during which a number of BJP councillors started moving into the House, chanting “Modi, Modi”, and raised slogans against AAP supremo Arvind Kejriwal.

Mr. Sisodia, a senior Aam Aadmi Party (AAP) leader, also accused the BJP of “running away from the election of mayor”.

“Everyone saw the drama of the BJP. The public had got fed up with their rule in the MCD. They gave mountains of garbage to Delhi and ruined the entire capital,” Mr. Sisodia said.

“First, they avoided MCD elections and when the public has showed them the door, they are running away from the election of mayor,” he said.

The BJP should accept their defeat in the MCD polls and ensure smooth election of mayor, he said.

The BJP knows that an AAP mayor will expedite work that it couldn’t do. This is not democratic, he said.

“We demand that the MCD House be reconvened and mayoral election be held today only,” Mr. Sisodia said.

(With inputs from PTI)