Pedalling for pleasure: How cycling is becoming an increasingly popular recreational fitness activit 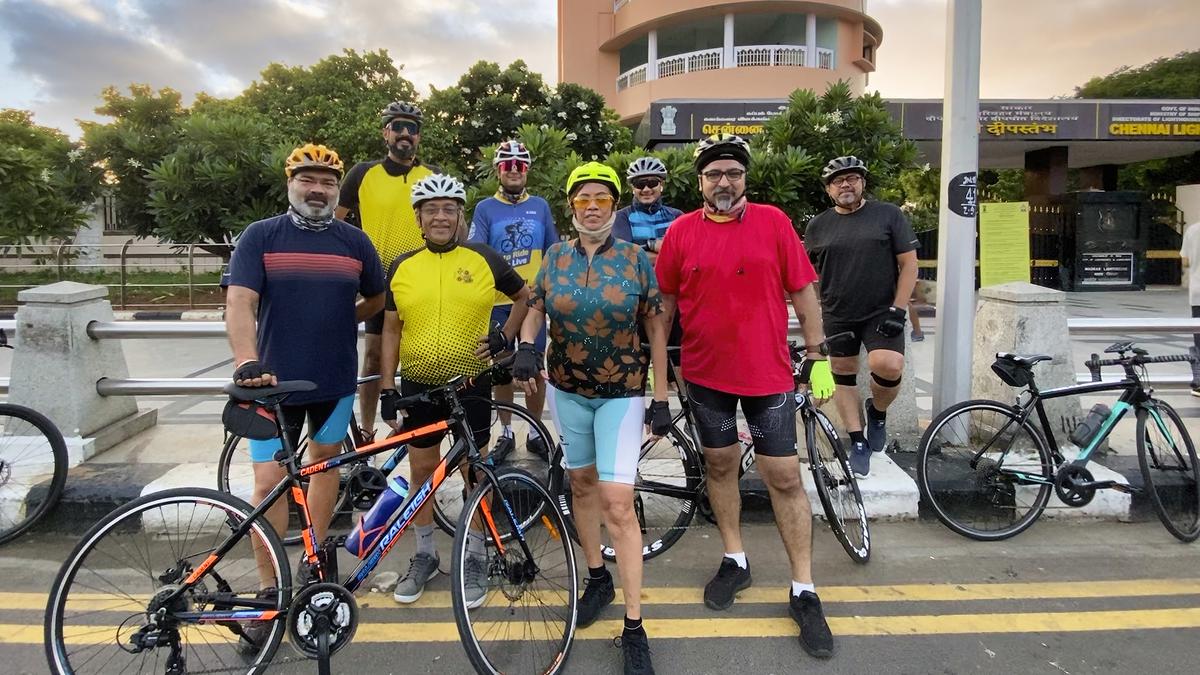 The last two years, especially, has seen a never-before-seen surge in people from urban India signing up for cycling

Photographer Kunal Daswani and his friends used to be regulars at Chennai’s Presidency Club. Clutching cue sticks, they would chat around the snooker table, with the sharp taps of the coloured balls punctuating the conversation. When the pandemic forced pretty much every place in India to shut down for several months, since March 2020, Kunal missed two things: a sport he liked to play and a social circle. Both, during the lockdowns, were essential — for physical and mental health — yet difficult to engage in. That’s when he did something that changed his life: he rode his brother’s bike.

“My brother had a cycle. He said it’s a good sport but he didn’t really like it. So, I took the cycle out once or twice. I started liking it a lot,” he says. Cycling was among the few outdoor activities allowed throughout the lockdowns. Soon, his snooker gang started meeting up for early morning rides.

Kunal, 39, calls this a lifechanging activity because it helped him, among other things, to wake up early, shed excess bodyweight, optimise his heart-rate, improve his mood, think of creative ideas, and make new friends. The traffic-free rides also allowed him a chance to explore the city more extensively than he has before.

He is among the many people across India who started pedalling, especially for recreation, during the pandemic. Though exact numbers are unavailable, cycling enthusiasts and industry analysts attest to this surge. On Strava Metro, the urban data service from the Strava fitness and networking app, the number of recreation cycle users went up from 21,673 in July 2019 to 37,529 in July 2020 to 51,685 in July 2021.

According to industry trackers, CRISIL Ratings, India, which is the second-largest manufacturer of bicycles in the world, saw a decade-high demand growth of 20% last year. “The pandemic-induced constraints on fitness and leisure options increased the demand for bicycles, especially in the premium and kids segments,” said its director, Nitesh Jain, in the report.

Rohan Kini, founder of Bums On The Saddle, a premium bicycle and bike accessories brand in Bengaluru, says his company’s sales figures in the last two years were four times more than usual. “There is no doubt that more people jumped onto the cycling bandwagon. It was one of the few good things that happened due to Covid,” he says.

Why cycle?
Even if we discount the Covid-induced surge of recreational cyclists, this community in India has been steadily growing over the last few years. Actor Arya, for instance, has been cycling since his school days. “It has been a part of my life for almost forever. But I started doing long-distance rides seven years ago,” he says.

Albeit for recreation, Arya takes cycling seriously. He is now busy training with his cycling group for the London Edinburgh London challenge, starting on August 7, a gruelling 1,500-kilometre endurance test that has to be finished in 125 hours. To get themselves acclimatised to the cold climes of London and Edinburgh, Arya and company are planning to shift their training to Ooty.

The actor, known for his fitness, devotes ample time for cycling amidst an active acting career. Because, he says, cycling is akin to meditation. “When you go on long rides, especially, you are alone with your thoughts. You can look at your life and analyse it better. It also makes you believe that you can do a lot of things that you thought you aren’t capable of.”

Bhagyashree Sawant, a former professor of Psychology in Bengaluru, concurs with the mental benefits of cycling. “For me, it is one of the strongest tools for happiness,” she says. “I notice a significant improvement in my mood when I start my day with cycling. [As we ride,] our body releases endorphins, which can keep us happy the entire day.”

Now a sports health professional, Bhagyashree, 30, holds the Guinness World Record for the longest journey (19,400.83 kilometres) by bicycle within a country. Two years ago, she along with another cyclist from Bengaluru, MJ Pavan, visited about 400 Government schools across 18 States and five Union Territories to spread awareness about polio.

Cycling can instil a sense of social responsibility, believes Vijay Malhotra, a Mumbai-based cyclist whose blog, Pedal And Tring Tring, covers the Indian cycling community. “The West Coast Riders in Bandra, for instance, did a tandem cycle ride with blind and partially blind persons recently,” he says.

Bengaluru’s ‘bicycle mayor’ Sathya Sankaran came up with Relief Riders during the second wave of Covid, wherein cyclists in several cities delivered essentials to those in need. Chennai too, under its bicycle mayor Felix John, was an active participant. In fact, Tamil Nadu Chief Minister MK Stalin is a cycling enthusiast.

Most cyclists are a part of a community. The group, in most cases, is supportive and inclusive. “When I did a 600 kilometre brevet [where riders attempt distances of over 200 kilometres] this year, after recovering from an ACL surgery, I was struggling a bit. It was very challenging for me to sit on the saddle for 40 continuous hours. But whenever I was slowing down or I was low, my fellow riders kept cheering me on,” says Bhagyashree.

This camaraderie is not just restricted to endurance events. Even coffee break conversations can foster a sense of belonging, says Kunal.

Beginners guide
With many of the urban upper class taking up cycling, options are getting wider. Bicycles, once considered a poor man’s ride, now cost lakhs. For instance, the highest-priced bike (BMC Roadmachine Two) on Bums On The Saddle’s is at ₹5,75,000. Though it is not the store’s most selling price category, there are customers willing to shell out that much for a bike. Of course, you can also find popular bikes that cost less than ₹5,000 in the market.

According to Kini, along with the bicycle, beginners should also invest in these additional accessories:-

Helmet:  A lot of people think it is not necessary because you aren’t going to go too fast like you do on a motorbike. But even slow crashes can be dangerous. So, make sure you buy a good quality helmet that has safety ratings (the cheap quality ones do not have these ratings). A good helmet will be light and well-ventilated.

Lights: The front light and rear light are very important. People end up using them only when it’s absolutely dark. But  they are quite effective during daylight as well for motorists to notice you. Look for lights that are waterproof, rechargeable with USB, and have a good running time.

Bottle: This is usually underrated. You need a good water bottle and a bottle cage to hold it. Especially on long rides, you’ll expend energy. So, it’s better to replenish on the ride than later. A lot of people just buy mineral water bottles and trash it, which is not good for the environment.

Pump: A well-filled tyre reduces wear and tear, lessens the chances of punctures, and makes the overall ride much more efficient. For that, you need to invest in a good cycle pump, something that can be easily carried around as well. Cycling computer: It is something that you can latch on your bike and can tell you information about your rides – speed, distance, cadence, and other things. It helps you ride more efficiently. And, it is not crazy expensive. You can buy basic ones for ₹1500. The more expensive ones can give you more complex data like heart rates and all that.

Rohan, who is an avid cyclist himself, says it is important for beginners to get the right bike. “There are three major categories: mountain bikes, road bikes, and hybrid bikes. If you are going to do a lot of off-road riding, you can go for mountain bikes. If you are doing in-city rides, then hybrids are good. If you want a bump up in mileage and your speed is important, then road bikes are a good choice. But within these three categories, there are hundreds of choices. So, it is important to get the right type and the correct size of bikes — wrong-sized bikes can lead to injuries. Talk to a local bike shop you trust.”

Once you get the right bike, Vijay offers some advice on what and what not to do. “First, be a part of local cycling club. It is easy to create and join groups these days with WhatsApp and Facebook groups. Do not immediately go for 100-kilometre rides or participate in competitive rides. Try and explore your neighbourhood, first. Maintain a good diet. Nutrition is very important. Many times people skip drinking water. Do not be sleep deprived, especially if you are an early morning rider.”

Leisure to commute
Cycling’s potential, especially in India, exceeds than just being a great recreational activity. According to the latest National Family Health Survey, as many as 54% of rural families and 43% in cities own a cycle. The Energy and Resources Institute’s (TERI) report from 2018, Benefits of Cycling in India, estimates that the country can save ₹27 billion in fuel and ₹241 billion due to reduced air pollution if 50% of two-wheeler and four-wheeler trips (within eight kilometres) are substituted by cycle journeys.

Which is why organisations like BYCS India, an offshoot of a Dutch social enterprise, focusses on increasing bicycle commuters. The bicycle mayors under BYCS work with the Government, companies, and other parties to pave the way — literally and figuratively — for cyclists in a city. Sathya, for instance, has fostered a vibrant cycling community in Bengaluru over the last several years. The city even got an artificial intelligence- and sensor-based bicycle counter, an electronic device (built by an 18-year-old cyclist, Nihar Thakkar) that counts cycles at a location for a certain period of time.

Despite all this, Sathya reckons the infrastructure is inadequate in Indian cities to persuade recreational cyclists to use bikes for commute. Kunal, for instance, considered the idea post-lockdown. “But the traffic is terrible. It is not the safest way to commute. Having said that, I try to use my bike wherever possible. In fact, over the last one year, I have covered 10,000 kilometres by cycle and only 2,300 kilometres in my car. If only our cities have a better cycling infrastructure…” he says.