This is when hard work begins: Sadhguru as ‘Journey For Soil’ nears completion

18th June 2022: Sadhguru met with the press in the day leading up to the long-awaited mega Save Soil public event in Bangalore, which was attended by Hon’ble Chief Minister Basavaraj Bommai on Sunday. Sadhguru had a fruitful interaction with the Chief Minister in Davos last month where the CM expressed his commitment and willingness to collaborate to ensure sustainable on-the-ground action is taken toward soil revitalization.

Sadhguru in Bangalore after his 100-day journey to Save Soil

After riding over 27,000 kilometers and arriving to Karnataka, Sadhguru meets with the press, responding to questions from the media about different aspects of the Save Soil movement. Sadhguru asserts with confidence that policy implementation will happen given the declared support of 74 nations and the social media metrics indicating a conservative estimate of over 3.2 billion people lending their voice to the movement.

He expresses, “as a policy, we are quite confident that it’s definitely going to happen” and going on to explain that “this is the when the hard work begins,” emphasizing the importance of now determining the speed at which policy driven action unfolds.

Sadhguru warns of famine threats, urges people to ‘get back on the ground’

Commenting on the cruel history of famine the nation has witnessed, Sadhguru comments that “famine is the most terrible and debilitating thing that can happen to a human being.” He describes the country’s entry into a green revolution, terming this the “emergency bridge” that the nation stood upon as a response to the fear of famine. “If we don’t get back on the ground, we are on a bridge to nowhere,” Sadhguru exclaims. 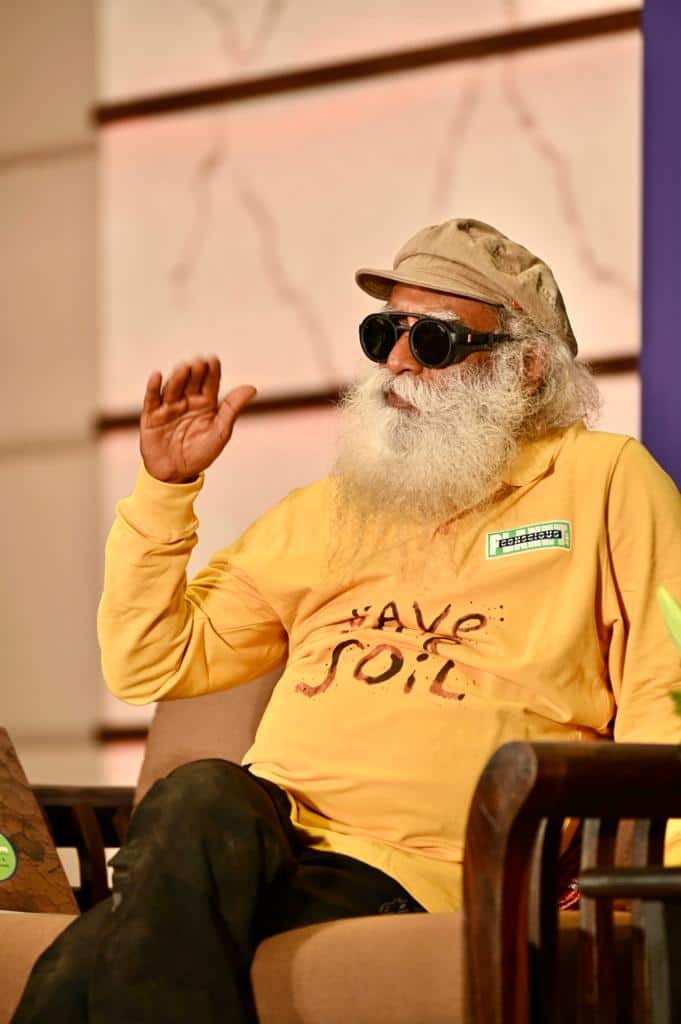 He pronounces the indispensability of “a serious, significant incentive because farm economy is so fragile” describing farming as the profession with the highest suicide rates given the heartbreaking and backbreaking effort it takes to grow food on degraded land.

Sadhguru emphasizes the need to separate soil from other ecological issues, reiterating that “soil is of existential significance” and is one aspect that will not run into a “collision course” with other lobbies, businesses or industries. In closing, Sadhguru announces that the press meet is the 593rd event since the beginning of the Save Soil journey on March 21st.

The 100-day journey will culminate on 21st June, 2022 in the Cauvery River basin where Isha’s outreach project, Cauvery Calling, has been working tirelessly to empower farmers to implement an agroforestry model that enables both agricultural and financial prosperity. This year, in a national breakthrough, the state government of Karnataka empaneled Cauvery Calling for promoting tree-based agriculture, with over 50,000 farmers shifting to tree- based agriculture.

In India, nearly 30% of fertile soils in the country have already become barren and are incapable of yield. The primary objective of the Save Soil Movement is to urge all nations of the world to mandate a minimum of 3-6% organic content in agricultural soils through urgent policy reforms. Without this minimum organic content, soil scientists have warned of the imminent death of soil, a phenomenon termed ‘soil extinction.’

At a Save Soil event in New Delhi, Prime Minister Narendra Modi joined Sadhguru in expressing his wholehearted recognition of the critical need for and value of the movement. Sadhguru presented the Soil Policy Handbook to the Prime Minister, which offers practical, scientific solutions that governments can put into action based on the soil type, latitudinal positions, and agricultural traditions of a given nation.

Since Sadhguru’s arrival in India, the Governments of Gujarat, Rajasthan, Uttar Pradesh, Madhya Pradesh, Maharashtra, Telangana, and Andhra Pradesh have expressed their full support for the movement and for implementing about on-the-ground action.

Since the start of his lone motorcycle journey which began on March 21, 2022 and covered Europe, Central Asia and the Middle East, Sadhguru reached the Western port city of Jamnagar, Gujarat on May 29. During the Indian leg of the journey across 9 Indian states, he has passed through Gujarat, Rajasthan, Haryana and New Delhi, Uttar Pradesh, Madhya Pradesh, Maharashtra, Telangana, Andhra Pradesh, and is currently in Karnataka.

The movement has even received heartening support from the youth of the nation with over 15 lakh children in India having written to the Prime Minister, requesting him to act to save the nation’s soil and their collective future. More than 65,000 students from more than 300 schools in over 25 districts of UP have written letters to the Prime Minister.

Mumbai terror attack mastermind, once claimed to be dead, arrested in Pakistan