‘Sadhguru saving us from…’: Karnataka CM at Save Soil event in Bengaluru

Sadhguru also handed the Save Soil Policy Handbook to the Chief Minister which offers practical, scientific solutions that governments can put into action based on the soil type, latitudinal positions, and agricultural traditions of a given nation.

“As far as journey of Sadhguru ji is concerned, this will be written in the history of saving the Mother Earth,” declared Karnataka Chief Minister Shri Basavaraj Bommai.

Noting that the current generation will be termed a culprit for stealing the food from the future, he emphasized the need of the movement to be successful “not only for every citizen on this planet, but it should be successful for the born child and yet to be born child- the future of this earth.”

“As a government, we have not only signed the MoU, I promise that we will do everything under the command to Save Soil,” assured the Chief Minister.

Karnataka is the first state in the country which has created an ecological budget: CM Shri Basavaraj Bommai

He shared that Karnataka is the first state in the country which has created an ecological budget and has apportioned Rs 100 crore for the same. Listing the actions needed for the organic content in soil in increase, he reiterated, “whatever action plans are needed for that and whatever implementation is needed for that, we will begin immediately.” 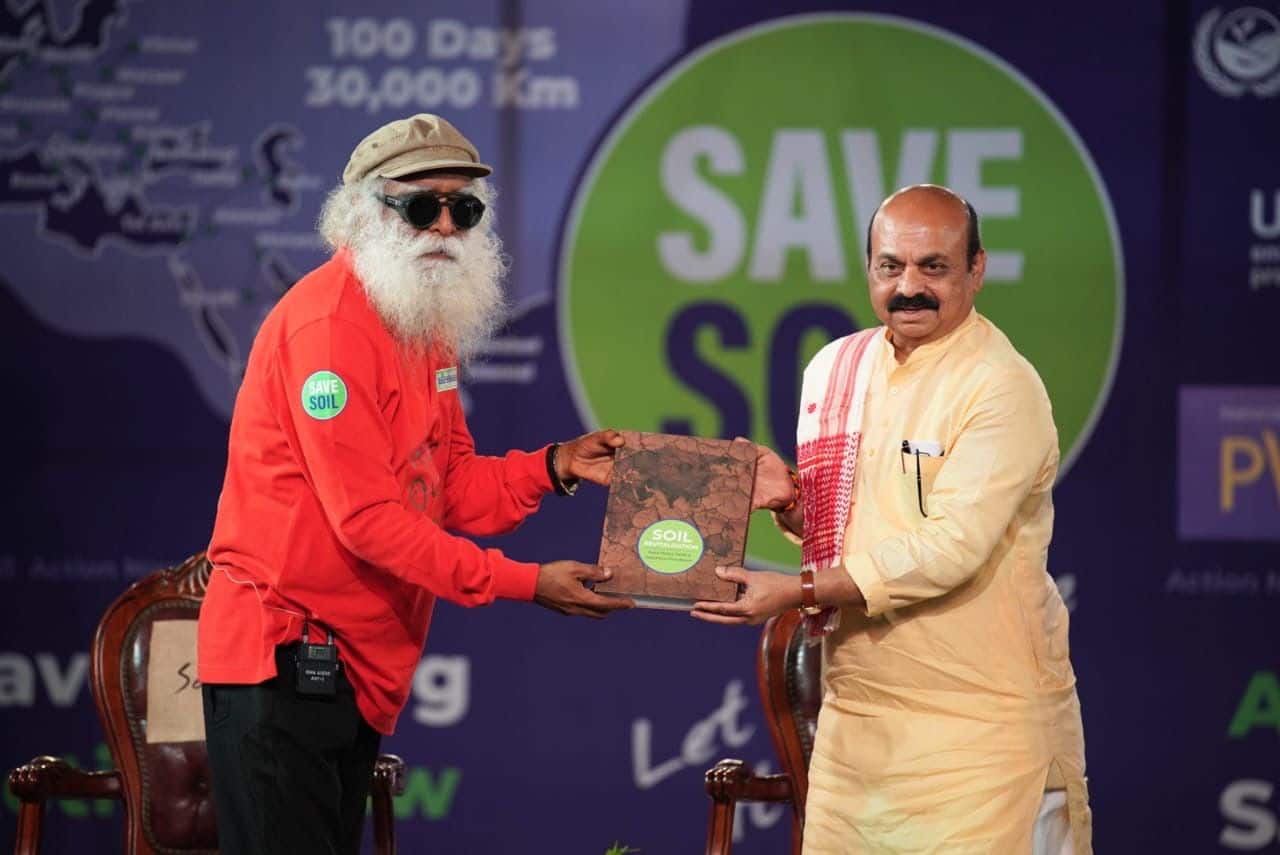 Reflecting on his journey, Sadhguru shared, “This is not only been a long journey, this has been an incredible activity. Volunteers from all around the world; UK to Europe to Central Asia to Arabia and Africa. They have done a fantastic job. I don’t have to say anything about India. And all the states that we passed through…every one of the states have signed MoUs with Save Soil movement.” Sadhguru who has now clocked over 27,000 km of his solo bike journey, and on his 598th Save Soil event, revealed that “4 days ago, we have touched over 3.2 billion people. So, this shows that people are not unaware, people are not insensitive, it just that it’s never been activated.”

Former Karnataka Chief Minister Shri B. S. Yediyurappa opined that “the movement is a necessity of today” and highlighted that soil losing its fertility leads to less food production and a lack of potable drinking water.

“The Save soil movement started by Sadhguru…is a noble work for the benefit of the world. I wish all the citizens to be part of this campaign for the good cause,” he ended.

Health Minister Shri K. Sudhakar applauded the commitment of Sadhguru for launching the Save Soil movement and noted that his actions are teaching that “whatever our previous generations have given us – pure water and live soil, we have to hand over the same pure nature to future generations.”

Commenting that an Indian guru is trying to unify the whole world with the Save Soil movement, he called upon the people to join in saving soil.

Education Minister Shri B.C. Nagesh said, “We worship the five elements but we have forgotten about it and Sadhguru ji is reminding us about it.” The minister promised that as suggested by Sadhguru, the education ministry will include the importance of soil in the school curriculum.

What is the aim of Save Soil Movement?

In India, nearly 30% of fertile soils in the country have already become barren and are incapable of yield. The primary objective of the Save Soil Movement is to urge all nations of the world to mandate a minimum of 3-6% organic content in agricultural soils through urgent policy reforms. Without this minimum organic content, soil scientists have warned of the imminent death of soil, a phenomenon termed ‘soil extinction.’

Since Sadhguru’s arrival in India, the Governments of Gujarat, Rajasthan, Uttar Pradesh, Madhya Pradesh, Maharashtra, Telangana, and Andhra Pradesh have expressed their full support and have signed MoU with the movement. At a Save Soil event in New Delhi, Prime Minister Narendra Modi joined Sadhguru in expressing his wholehearted recognition of the critical need for and value of the movement.

The 100-day, 30000 km journey will culminate on 21st June, 2022 in the Cauvery River basin where Isha’s outreach project, Cauvery Calling, has been working tirelessly to empower farmers to implement an agroforestry model that enables both agricultural and financial prosperity. This year, in a national breakthrough, the state government of Karnataka empaneled Cauvery Calling for promoting tree-based agriculture, with over 50,000 farmers shifting to tree- based agriculture.

Since the start of his lone motorcycle journey which began on March 21, 2022 and covered Europe, Central Asia and the Middle East, Sadhguru reached the Western port city of Jamnagar, Gujarat on May 29. During the Indian leg of the journey across 9 Indian states, he has passed through Gujarat, Rajasthan, Haryana and New Delhi, Uttar Pradesh, Madhya Pradesh, Maharashtra, Telangana, Andhra Pradesh, and is currently in Karnataka.

SC to hear Eknath Shinde’s plea against disqualification on Monday